Proposal for the realization of an artistic installation in the new Pôle enfance de l’Orangerie in the La Gavacherie neighborhood in Niort (France), within the framework of the “1% artistique” program.

In the treaty drawn up by Johann David Stein Gruber in 1773 and from his dream of flying with the prince over a palace designed with the initials of his name, or thinking about the design made by Thomas Gobert a hundred years earlier for Louis XIV in which a palace was made up of eleven letters with which the phrase LOUIS LE GRAND was written, the relationship between built form and writing has continued to this day.

Our proposal for the Kindergarten of L’Orangerie starts from a double reflection on contemporary cities as great textual containers.

On the one hand, the presence of written elements redraws the landscape of the city’s public spaces; permanent inscriptions such as those that allow and make visible the instructions for the use and understanding of the city or that fix its memory, slip through the interstices of the daily experience of the city.

On the other hand, writing is a very direct form of intervention on the urban landscape and operates on the public space considered as an interface. There has also been a proliferation of urban writing modes other than standardized advertising, more individual or spontaneous writing such as graffiti, tags or stickers. In all these cases, the writing is closely linked to a visual materiality, and the urban reader is a fragmentary and instantaneous reader. 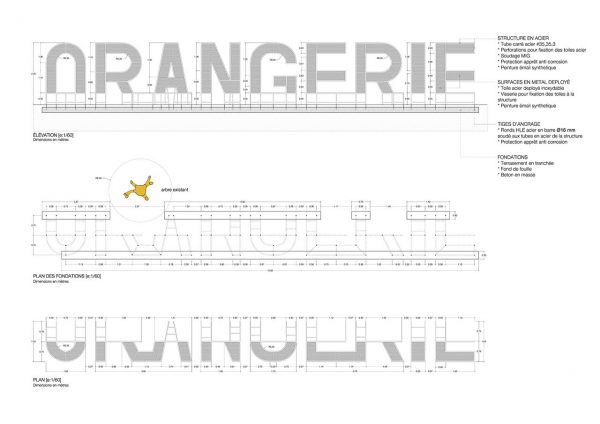 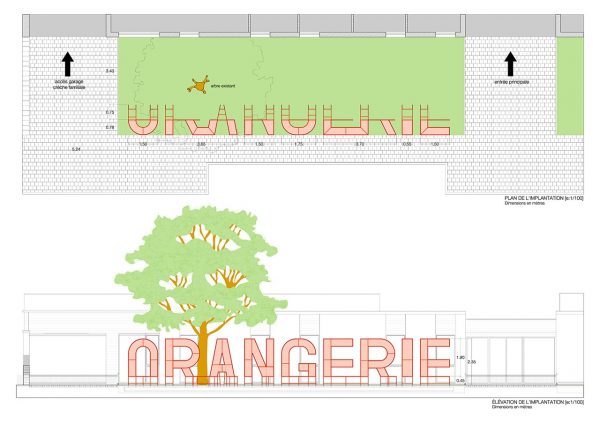 It is in this framework of reflection on the role of writing in the use and perception of public space in cities where the project of l’Orangery is.

The project derives from a research work on the landscape potential of the alphabet as a material for the construction of panels, posters and urban signs, on the potential of letters to transform or adapt to new uses beyond their semantic, advertising or informational values ​​and on the potential of labels to adapt to new formats in which the active character can take on importance through the direct and playful participation of citizens.

We propose the installation of a large-scale grouping of letters, a physical alphabet, a large urban sign that iconically embodies the word ORANGERIE, simultaneously referring to the name of the new nursery as well as the old greenhouse (in French Orangerie) that previously occupied this place.

VIEWS OF THE INSTALLATION: 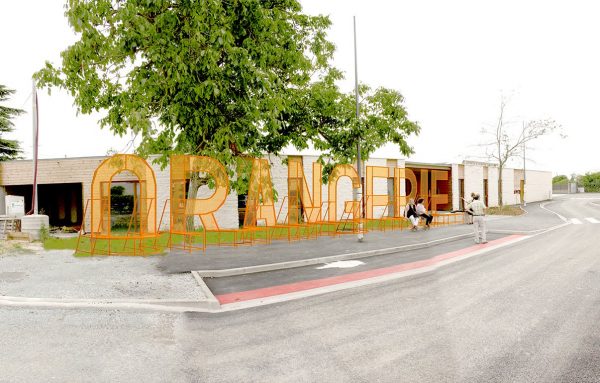 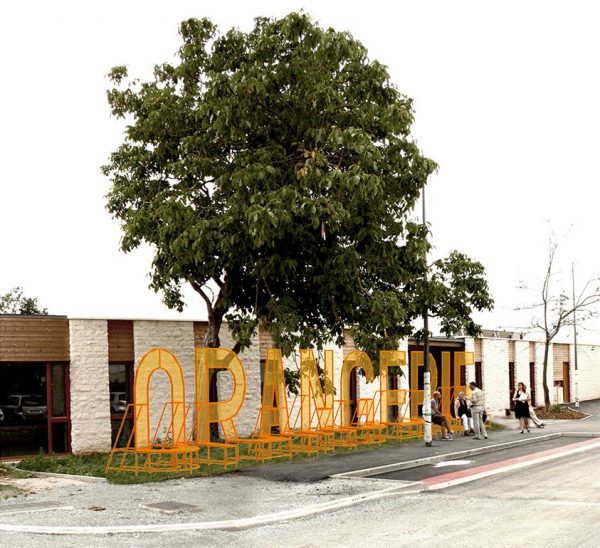 The installation is readable at two scales:

– At the landscape scale it is a sing made up of the grouping of nine letters O-R-A-N-G-E-R-I-E, a representative icon that reinforces and indicates the entrance to the Kindergarten.

It is materialized using light and transparent elements with the intention of not obstructing the views to the outside from the offices and the meeting room as well as the natural lighting of these spaces.

– At the scale of use, we work on the potential of letters to transform or adapt to new uses beyond their semantic, advertising or informational values.

Each of the letters, or the partial grouping of letters, constitutes a place to meet or rest, increasing interpersonal relationships as much as possible: sit face to face, in small groups, rest with your legs stretched out, lean on your back … Each letter is a small square. 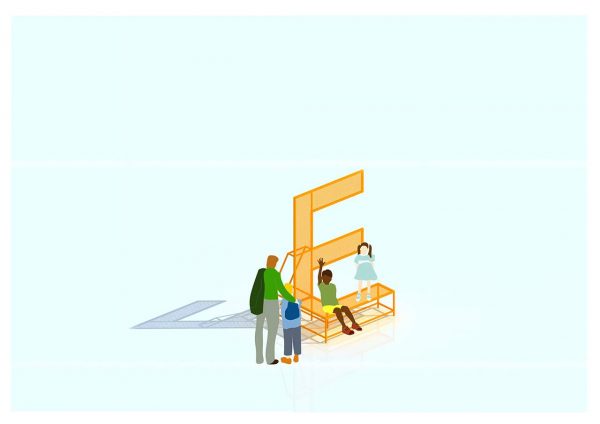 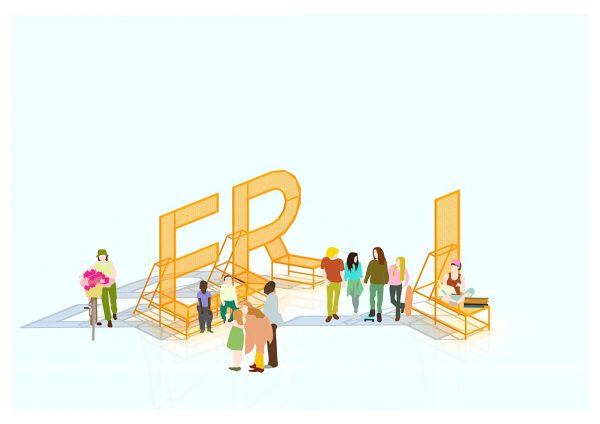 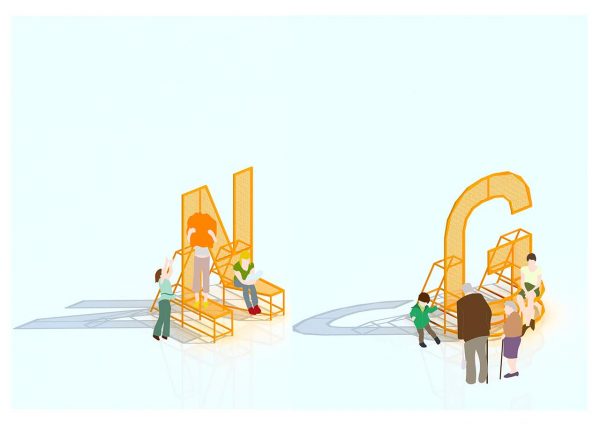 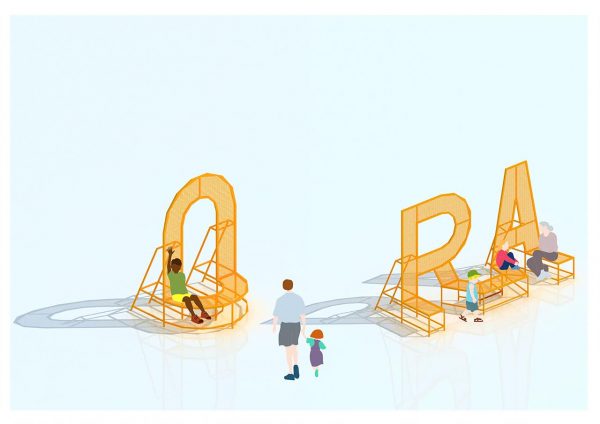 Another aspect to which attention has been paid is the way in which the facility could make some contribution to the relationship between the nursery and the public space shared with neighboring communities. What we have called: going from “the space to stop for a minute” to “the space to stop for more than five minutes”.

Or how to create an identity for the Kindergarten through intervention as a first step for community interaction.

From a strictly functional point of view, the use of this space is envisaged, in a very restricted way, as a place of rapid passage in which parents and daycare workers only circulate, which creates an impoverished expectation in the relationship between the nursery and its front garden and, consequently, with neighboring communities such as the Cirque en Scène cultural association or the Côteaux de Ribray nursing home.

Similar to what happens inside the nursery, where users have small waiting and meeting places next to the courtyards open to the outside, couldn’t the entrance space to the Kindergarten be converted into an appropriate place and desirable to stand for more than a minute and perhaps enjoy casual and informal encounters with other members of the daycare community? or, why not, to give way to members of neighboring communities.

MODEL OF THE PROJECT: 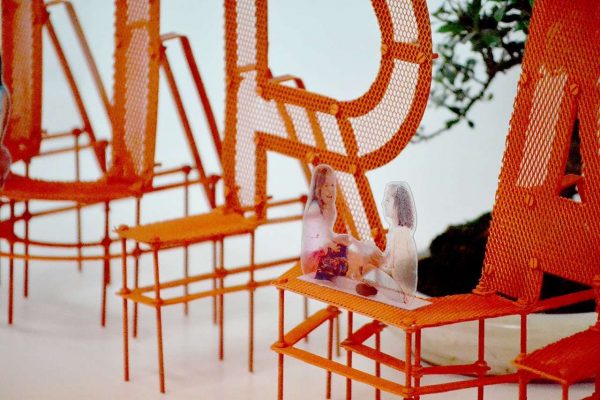 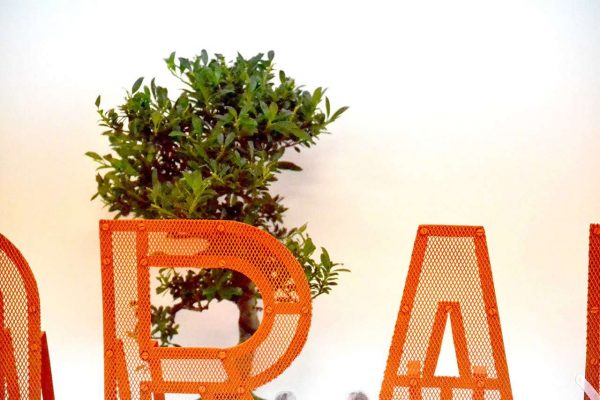 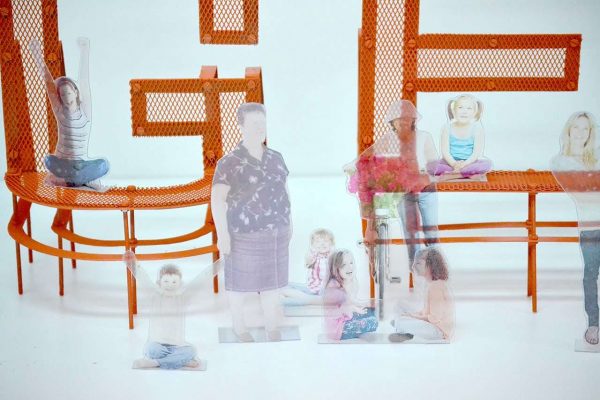 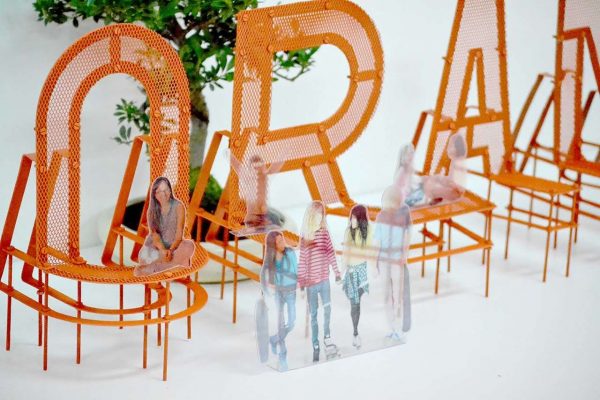 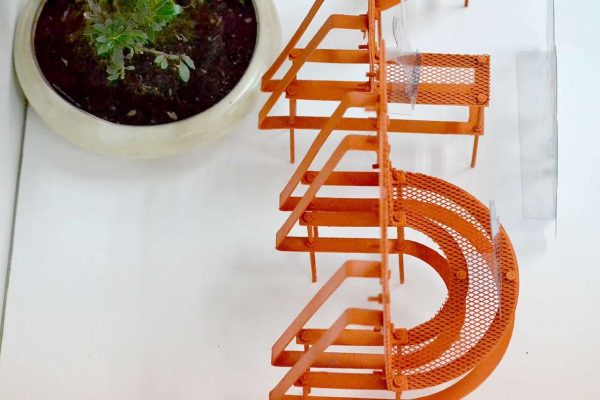 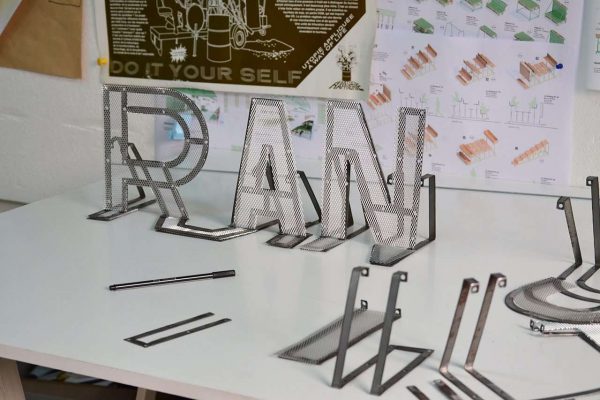 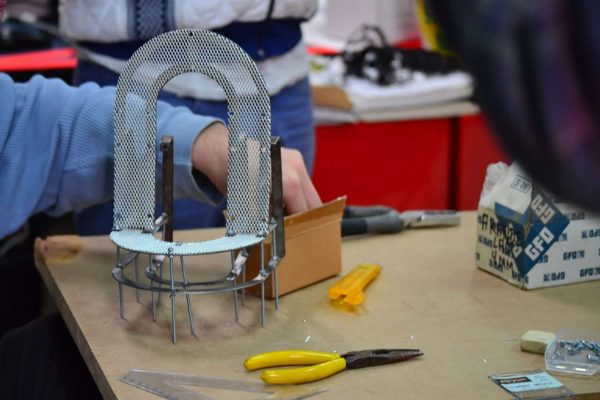 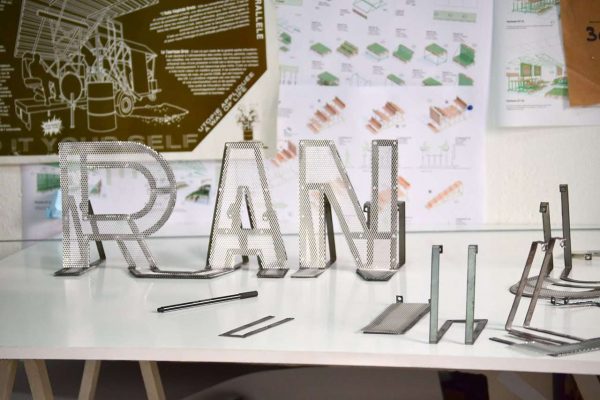 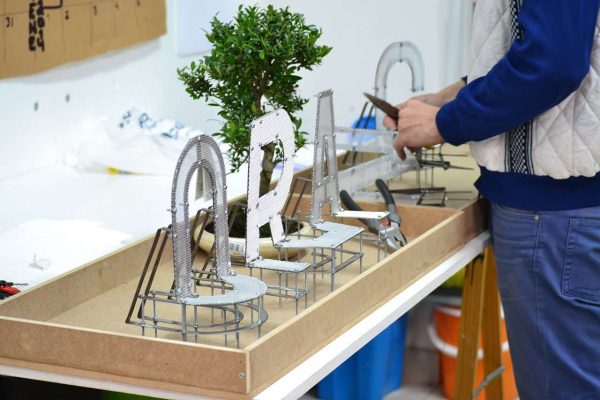 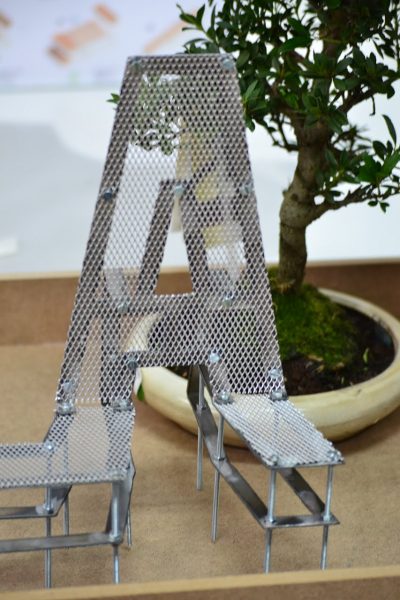 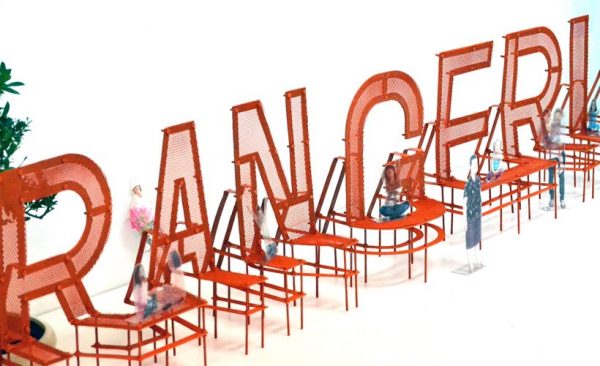 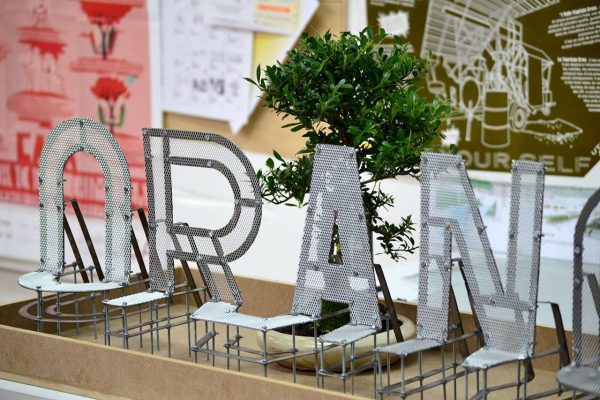 The installation is an opportunity to make a contribution to the quality of the neighborhood’s public spaces and therefore to its quality of life.

Lastly, the installation could become one of the representative icons of this equipment, an image that could become a graphic alphabet that can be used to identify the Kindergarten of l’Orangerie, and also a ceremonial place where users of the space could get together for special occasions such as taking the photo of each new generation.

VIDEO OF THE PROJECT:

A project by David Pérez / PKMN [pac-man] Architectures
With the collaboration of Josh Wallace and Sarahí Flores.